The military services are working to implement the 2016 Military Justice Act. The intent of the act is to produce a streamlined and transparent court-martial process, one that will closely resemble criminal practice in the broader federal jurisdiction. These efforts appear in the new 2019 Courts Martial Manual.  Service implementation of the Act is intended to increase effectiveness of military prosecutors in gaining convictions. Changes like these take time and practice and could result in error in implementation. In individual cases there may be opportunities during the court-martial appeals process to correct errors in their implementation.

MJA 2016 changes some UCMJ Articles and creates some new ones

The Act’s changes most directly affecting the accused are the changes in the substantive criminal code. As an example, when services members were charged with Article 134, it was a general article which was a catch-all for any number of violations within the UCMJ. The Act now codifies many General Article offenses under specifically named substantive articles. Upwards of 36 separate crimes fell under Article 134 where as now a violation such as child endangerment has its own designation as Article 119b. (see graphic 1a for a partial list of these transitions).

In other amendments to the criminal code, the Act amends Article 120 which clarifies what is considered sexual contact, a sexual act, and defines consent. One specific change is the definition of within Article 120(b) of sexual assault: the criteria element of “causing bodily harm” has been removed.

Other elements remaining in Article 120 and define a sexual assault act are “Threatening or placing in fear”, “Fraudulent representation”, and “Inducing belief that a person is another person”. Additionally the Article specifically adds that a sexual assault is committed when a sex act is done without the consent of the other person. This is a specific element that was not in the original Article, but referred to only as requiring the accused should reasonably determine that the other person is asleep, unconscious or otherwise unaware. The changes to the Article specifically defines the inability to consent as “incapable of appraising the nature of the conduct at issue or physically incapable of declining participation in, or communicating unwillingness to engage in, the sexual act at issue”. Still remaining as part of the definition of consent is “a mental disease or defect, or physical disability known or reasonably should be known”. 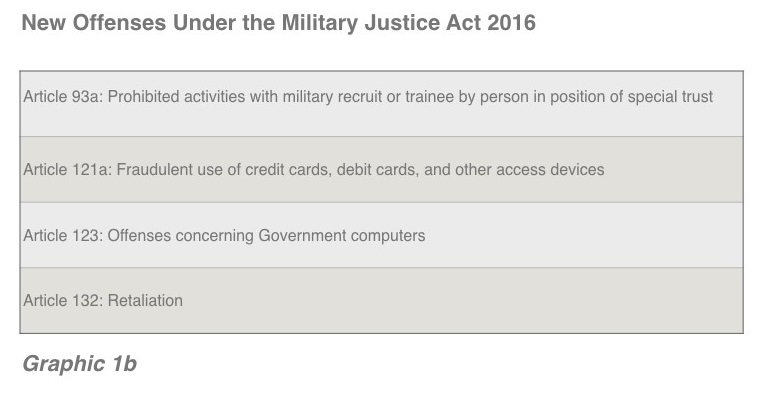 Additionally there are punitive article additions related to offenses committed against military recruits or trainees such as retaliation or engaging in prohibited activities. In answering the demands of our significantly evolved technological environment the Act also updates offenses involving the fraudulent use of credit or debit cards, government computers, or other access devices. (see graphic 1b)

Article 93a prohibits activities with a military trainee or recruit by persons placed in a position of trust. Military recruiters, drill sergeants and other trainers have been convicted of abusing their trainees in one manner or another. The MJA 2016 has specifically created a new article to address the concern. Additionally, the Act defines specifically who is considered a trainee or recruit and who is considered a person placed in a position of trust.

Article 121a outlines fraudulent use of credit cards, debit cards, and other access devices. Stealing another’s credit card and obtaining goods or services by using that card is listed as “theft and misuse of credit / debit cards”. This criminal act is charged under Art 121a as obtaining-type larceny by false pretense”. This charge requires requires correct identification of the victim incurring the loss and comes with recurring issues with practitioners being able to accurately identify the victim.

Article 123 concerns offenses with the use of government computers. Currently, military prosecutors can charge computer crimes committed in the U.S. under clauses 1, 2 and 3 of Art 134. However not all of Article 134 was chargeable outside the US where many service members serve OCONUS. Article 123 resolves this issue as its chargeable regardless of location.

New Art 123 adopts a criminal offense similar to 18 USC §1030, which are fraud and related activity in connection with computers, and contains three types of offenses:

The changes also articulate what is considered a government computer and what specifically defines a device as a computer. Additionally the Article defines what is considered an unauthorized purpose: “key criterion for criminality is whether the person intentionally used the computer for a purpose that was clearly contrary to the interests or intent of the authorizing party”.

Article 132 is a new offense that outlines retaliation. It focuses on persons with military authority misusing their power for the purpose of retaliating against anyone for making a protected communication or reporting a criminal offense. It outlines an intent to retaliate: when personnel action is done for the purpose of reprisal, retribution or revenge.

Effectiveness and efficiency of the military justice system

The military services intent in implementing the Military Justice Act act is to produce a streamlined and transparent court-martial process, one that will closely resemble criminal practice in the broader federal jurisdiction. The changes to Articles 134, 120 and the addition of new articles are being implemented across the services to achieve this end in addition to the myriad of changes affecting processes and authorities within the military justice system. The U.S. Army and other services are working to train their legal staff to execute the new changes.