I am military lawyer Peter Kageleiry, Jr. I have successfully defended court-martial cases and assisted service members protecting their careers all over the world. Using my experience as a discharge lawyer and a court-martial attorney, I defend U.S. military personnel who need a military criminal defense lawyer at Fort Eustis and the Hampton Roads area. 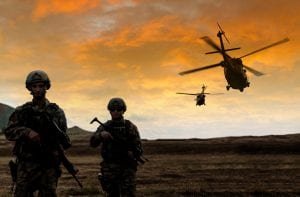 U.S. Soldiers in Afghanistan on patrol after being deployed from Army Helicopters. Soldiers at Fort Eustis learn how to keep these helicopters flying in America’s defense.

You deserve the best defense

In this long legacy of service, service members put their lives on the line serving their country. But service members sometimes face challenges that are a threat to their careers and their freedom. When your future is at risk, you want to have the best criminal defense and legal representation possible in a lawyer at Fort Eustis.

Service members, who need a military criminal defense lawyer at Fort Eustis, work hard to maintain their readiness to response to potential conflict and support the warfighter through their work at one of the several commands active on Fort Eustis. Because of this legacy of service you have earned the right to an experienced court-martial defense attorney at Fort Eustis. When it comes to defending your rights, I approach my job the same way you approach yours: my mission comes first and that mission is defending your career, your rights, and your freedom.

If you are serving at Fort Eustis and are facing a court-martial or under investigation, you need a tough, experienced, aggressive military attorney at Fort Eustis. I am a retired Judge Advocate and former paratrooper. In my military career, I earned a reputation as a tenacious fighter for the rights of service members. You need an aggressive military law attorney with the experience to know when and how to fight against the vast resources the government brings against you. You need a court-martial specialist who places your rights and your military career first. I have helped thousands of service members like you.

If you are an officer facing a Board of Inquiry or an enlisted service member facing an adverse administrative discharge, or facing court-martial, don’t wait to get the experience you deserve. Whether you need a lawyer at Fort Eustis or in the Hampton Roads area, contact my office at 757-231-5406 or through our convenient online form to schedule a free consultation.

Are you being investigated or are you accused of a crime such as sexual assault, adultery, or fraternization? Or you are facing an administrative separation board, letter or reprimand or GOMAR, or facing an Article 15? Don’t wait, contact the Law Office of Peter Kageleiry, Jr. right away.

Fort Eustis is a U.S. Army installation in Newport News, Virginia. Fort Eustis was established in 1918 on what was previously called Mulberry Island. The federal government purchased the land and named it for  the first commanding officer of Fort Monroe,  19th century military leader Brigadier General Abraham Eustis.

The former home of the Army Transportation Corps, Fort Eustis is located in the south-eastern part of Virginia known as Hampton Roads. The U.S Army Transportation Museum is located at Fort Eustis. The installation also hosts other significant organizations like the Army Training Support Center, the Aviation Applied Technology Directorate, and the Enterprise Media Center. Aviation logistics and maintenance Soldiers get their occupational education at Fort Eustis.

We're not around right now. But you can send us an email and we'll get back to you, asap.